Jeremy and I decided to make a goal to become more active. Not so much to lose weight, but just to have a more active and healthy lifestyle. I have heard of Orange Theory Fitness and I really wanted to try it, we have a location very close to our house. So we signed up for our first free class and headed out to see what it all entailed. 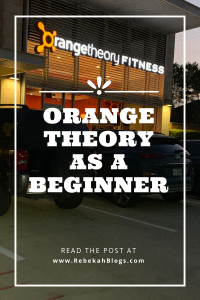 I don’t know anyone who does Orange Theory, a few of the Youtubers I watch go to Orange Theory which is what piqued my interest. I went onto Pinterest to kinda see what to expect before our first class and honestly everything I found was from people who are pretty active and into fitness. Those posts weren’t super helpful because we were starting from ground zero.

I have now gone to three class and I am HOOKED. All the classes I have gone to are all so different and such high energy. The time FLYS by and it is just fun. I have gone to the same coach twice and those classes were not similar. I think I needed something where somebody was telling me what to do, but in the large group setting which is what OTF does. I like that I can slow it down for myself or modify the workout if I need to and the coaches give you those options. I have never used a rower and the coach came by and showed me the proper technic for it. You get the one on one without having someone starring at you through the whole workout.

What to expect before your first class:

They want you to come 30 minutes early and they STRESS that when they call to confirm your appointment. When you come early they talk about some of your fitness goals and what to expect out of the class. They introduce you to your coach for that class and they kind of go over what to expect from that class. The whole concept of Orange Theory is that your heart rate reaches a certain level. The people at the desk will go over the theory and show you how to put on the heart rate monitor. After they go over all of that class is about to start.

What to expect during class:

This class is HARD, especially if you are starting your fitness journey at OTF. Our coach was amazing and she really helped us to understand what we were doing. The class is pretty fast pace so you can get lost really easily. Our coach would explain things a little slower and make sure that we understood the instructions. The second class I still felt a little lost, but by the third class it all made so much more sense. Throughout the class, she would just check-in with us. I was super nervous going into it just because I really had no idea what to expect and the coach made us feel so comfortable and confident throughout the workout. They understand that everyone has the start somewhere and everybody has to have that first class experience.

What to expect after class:

You will be sore. We were so sore right after the class and the next few days following. After the class is over whoever you chatted with before will go over how you liked the class and what you thought. They go over the different options and prices. The guy who helped us did a really awesome job at explaining ALL of the options and not just the expensive option. We decided to go with the 8 class a month package. One thing I didn’t realize until after we signed up is that we would have to buy the heart monitor. It truly didn’t cross my mind since they gave us heart monitors before class started, they also give you the option to try out the two different types of heart monitors. We ended up just getting the one that goes around your chest, which is the cheapest options and the option the guy recommended.

4 thoughts on “Orange Theory Fitness as a beginner”