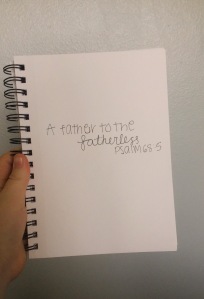 I was having a conversation with a younger girl the other day who asked me if I had a dad and when I said no her response was “that’s sad”. It caught me off guard, nobody has ever said that to me. It made me think about how sad this really isn’t.

What’s sad is what could have been and the things that happened. That’s what’s sad.

Every Father’s Day I write a letter to God. It’s my Father’s Day card to Him. I thank Him and love Him like any other person would to their earthly father.

Nobody is ever fatherless. God is the Father to the fatherless, Psalm 68:5.

That scripture is the best thing I have ever read. It brings hope. Creates normalcy.

I grew up thinking I was unworthy and different. Then I had a very influential woman and friend who showed me how much my Heavenly Father loves and protects me.

When I was robbed at gunpoint my Heavenly Father kept me safe.

When I didn’t have money for a car my Heavenly Father provided me a car without payments.

When I didn’t have a way to pay for school my Heavenly Father provided.

He keeps me safe and provides for me and I need that more than some earthly being who wants to drink rather than take responsibility.

For my Father is the father to the fatherless and that is NOT sad.